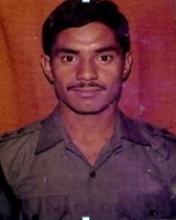 No 851580032, AC-II H S Negi was born in village Pauri in District Pauri Garhwal of Uttarakhand. He joined 13 SRG NSG on 20 August 1987. On 06 July 1990 during “OPS CLOUD” AC-II H S Negi was deployed as scout in the southern point of the ambush placed i.e. between Vill-Varnala and Punia, Distt- Tarntaran (Punjab). At about 0130 hrs the party detected 5 to 6 terrorists surreptitiously moving along with the track. The ambush party waited till the terrorists walked into the killing zone. AC-II H. S. Negi realized that the long grass grown in that area had become impediment in effective neutralization of the terrorists. He in a glaring act of courage came out in open & fired shots on terrorists and intermittently resumed cover. Meanwhile, one of the terrorists sneaked away behind and fired a round of burst on AC-II H S Negi which hit him on his body and later he succumbed. AC-II H S Negi made the supreme sacrifice as a conspicuous act of bravery, unparalleled dedication to the mission while combating terrorism in Varnala, Tarntaran, (Punjab) during “Ops Cloud” on 06 Jul 1990. He was survived by father Sh. M S Negi, mother Smt Kalpeswari Devi, wife Smt Bijayanti Devi, son Anurag Negi and Daughter Akansha Negi.